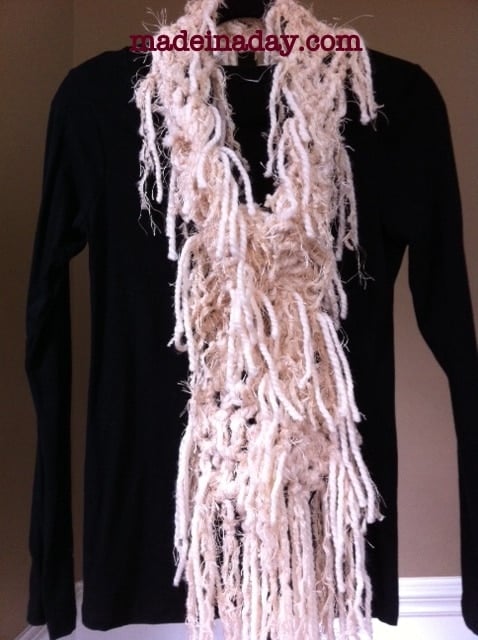 I have been looking at all the No-Sew scarves and other crafty things that have been around for a while and I came across this Martha Stewart No Knit Scarf.

The directions for it were very vague and many a crafter had left a comment trying to figure this one out. Shame on you Martha for making us work for it! And work for it I did…3 1/2 hours later, I got it!! So to make it easier for you I thought I would let you in on my version. Mine looks much fuller because I added some flair! Read on to see how I did it~

In this tutorial, I will be making an 87-inch scarf. Here is the link to Martha’s scarf. For Martha’s scarf they used a large bulky weight yarn, I was unable to find some as bulky as hers, but the Lion Brand Yarn was pretty close. To make it bulkier though I used two strands of each yarn type per bunch. Total of 4 strands.

Measure and cut 3 yards of yarn per strand. This ends up with some extra length to play with in case you want a larger scarf.  Martha divided her yarn into 4 bunches with 3 strands each, I used 6 bunches with 4 strands each, to make the scarf wider.

Also, Martha says to use square knots to tie her scarf, I used plain simple knots for the tops of the fringe, and double knots on the scarf and it worked out just fine. Just pull them tight. 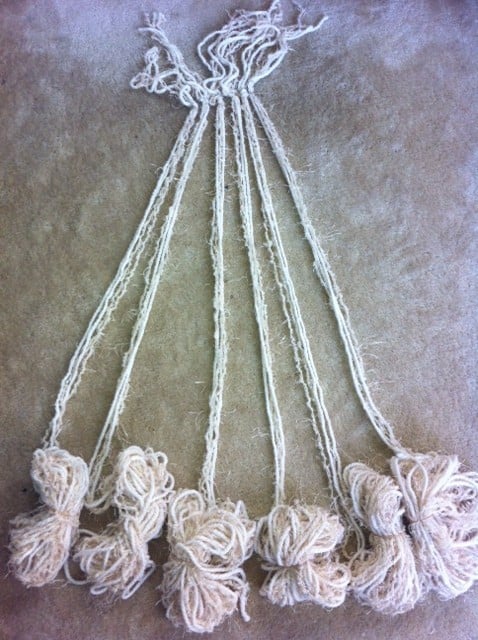 After everything is separated, take your bunches and tie your first knot, leaving room for fringe for the end of the scarf. Then pin that knot securely to something, a craft table, a foam board, etc. but remember you will need a lot of room to work. I just used my living room carpet.

Take your next knot and pin it close the second one and so on (see pic). I then wrapped the long strands around my hand and rubber banded the bunch together, believe me, it’s easier to work with the long strands this way. Start tying knots by tying the two center ones together first, space them 1in to 1 1/2 inches apart.

Now for the finishing touches! I like a more fringy look to my scarves to make them full. So for the fringe on edges, I cut two, 12in strands of the two separate types of yarn I used. Tie with what I call a simple loop knot.

Fold strand in half, insert looped end through scarf loop and then put the ends through the loop and pull tightly on the tail to secure. Tie them to every other outside loop on both edges of the scarf. And Viola!! You got one cool & sassy scarf!! I plan on making a bunch of these in different colors! Love it!

Check out more of my Craft Projects~ 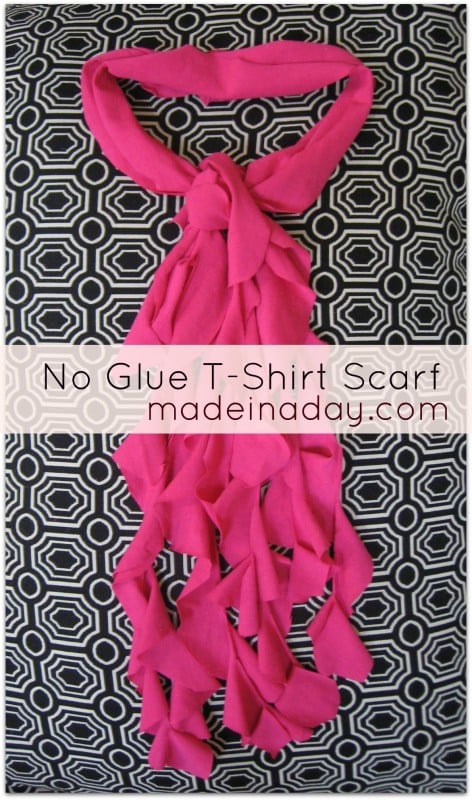