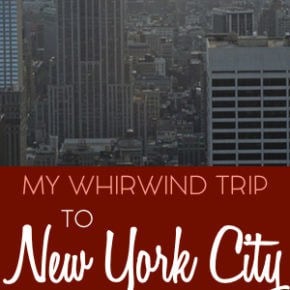 I finished off December 2014 with a fabulous trip to New York City! My sweet husband took me on a whirlwind trip all over the Big Apple. We had three days to fit in as many places as we could. I loved it so much, I can’t wait to go back. No wonder so many people live there, what a busy, bustling amazing place.

The first thing I thought when we were landing was that there were so many houses and streets right outside the city. How were we going to see everything in three days?

We stayed at the Waldorf Astoria Hotel in midtown, what an incredible historic place. It was so amazing to stay in a place that has housed some of the most famous people in the world. There are cool old photos on every floor and down the hallways of countless famous celebrities and many presidents.

The first day we went to Rockefeller Center.

It was super crowded in the streets. This is the Rockefeller Christmas Tree in the daytime.

The Rink at Rockefeller Center.

And because I watch the Today Show every day I had to go in the lobby for a pic. This is where they interview the ladies before their makeovers.

On to the Top of the Rock!

View of The Empire State Building. The small island on the right is Liberty Island with the Statue of Liberty.

Here is a great view of Central Park from the Top of the Rock Observation Deck.

On day two we went to Lower Manhattan and walked Battery Park to its end across from Liberty Island.

Then we walked back to Ground Zero and read both Memorial Tower Fountains for the fallen twin towers. They were extraordinary and peaceful.

Next, we toured the 9/11 Memorial Museum. When you walk in you look over a cliff and see the “Last Column” pic below. You then wind down seven stories below street level into the museum. This is the saddest place I have ever been to in my life. So quiet and so cold.

The Survivors Stairs, Historic Vesey Street Stair Remnant. During the attacks of September 11, 2001, this stairway served as a vital route to safety for many people.

Spencer Finch, Trying To Remember the Color of the Sky on That September Morning, Artwork at the National September 11 Memorial Museum.

The Wall of Faces Memorial, from here on out we were not allowed to photograph anything.

This is by far the saddest place I have ever been. I guess it is because we all lived it and being there brings it all back. I found myself hurrying through the exhibits, not wanting to read or really look at them. I just wanted to leave. It’s a tomb really if you think about it.

I was surprised at the number of people who were reading everything, most of them were young children in 2001 or were from other countries and were genuinely interested in the facts. For me hearing the old tv news reports and seeing it all crashing down again was just too much.

However, the museum is still a must-see, it makes you appreciate our country, how lucky we are and to be truly thankful for the Military, Firemen, and Policemen who fight for us and protect us each day.

We spent the rest of the afternoon hanging out in Greenwich Village, then onto Times Square.

This pic does not do Times Square justice, it literally looks like daytime at night with all the lights on the buildings around you.

Day three was spent on the Upper Westside. We got up early and went by you guessed it ..The Today Show!!

I snapped this quick pic of Tamron, Al, Willie, and Natalie before the security guards shewed me away from the window. Barry Manilow was outside collecting toys but we missed him.

We walked all the way over to Central Park.

Entrance to John Lennon’s apartment building, The Dakota. Later we came back by and I actually saw Maury Povich standing here looking at his phone {he lives here}, but I was too chicken to say hello.

And… few blocks down is… The Night at the Museum!!! Actually, it’s the American Museum of Natural History, but it looks just like the movie inside and out.

Next stop is FAO Schwarz!!

I almost had a heart attack, they have “Build a Muppet” actually called Muppet Whatnot Workshop, where you design your own Muppet or have one of your favorite characters made. My husband had to drag me out of here.

The Saturday Night Live candy was my fav!

New York is truly one of my new favorite places to visit! And yes it can be done in just three days! We went to some great craft beer places, shopped at the Union Square Holiday Market, ate some incredible food, and even rode the subway. We had such a great time in New York City for the holidays. I can’t wait to go back!

Check out more of my Favorite Vacation Spots~

A Long Weekend in LA 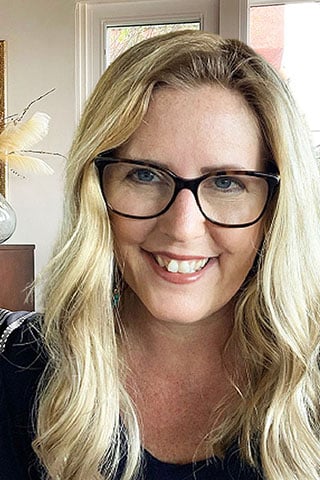 I am here to bring out your inner gypsy and show you how to ROCK your home space and create that funky modern bohemian flair you’ve been looking for!

Psst...Want the coolest On Trend Art Prints for FREE?

Fill out the form below to get my Entire Collection of Stylish Wall Art, to take your walls from dreary DULL to bold dramatic.