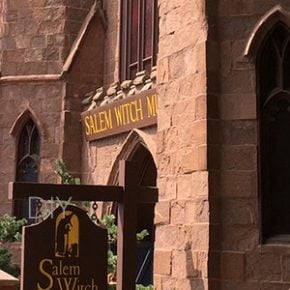 Disclaimer: Please note that some of the links below are affiliate links and at no cost to you I will earn a commission if you purchase through those links. See my Disclosure + Privacy Policy for more info. As an Amazon Associate, I earn from qualifying purchases.

Every summer we go to a different location to explore the country. This year we went to Boston and then Salem, Massachusetts for My Bewitched Day Trip to Salem. It was a great escape from the heat of the south as well as a much-needed break for all of us. For more of our vacations see Our Favorite Travel Destination page.

I have wanted to go to Salem since I was a child. The mystique of the witch trials and being around one of the craziest parts of American history is the draw for me. Plus who doesn’t love spooky stuff?

Learning about what really happened first hand and seeing where it all went down instead of just the Hollywood versions was quite humbling.

It is rather sad how gullible people were back then. Combine that with the power of persuasion, which in turn allowed them to take the lives of innocent people.

On every vacation, we love doing tours to get a feel for the history of the places we go. Then at night we usually pick a haunted tour to get the dirty truth hidden in the cities history. Let me share our fun vacation with you!

If you decide to visit Salem, I recommend doing the Salem Trolly Tour before anything else. It takes you all over the city past all of the hot spots of Salem. It is hop-on hop-off so you can get the feel of the place and pick what you want to see first.

First up is the cute Bewitched Statue donated to Salem by TV Land. This is where the Salem Trolley tour begins, she’s surrounded by all kinds of spooky gift shops and magic stores. Grab a witch hat and climb aboard.

Salem Witch Museum was first on our list. It is basically a round theatre with life size dioramas telling the story of the Salem Witch Trials. The building looks so menacing, that I was expecting something more like a haunted house. I was wrong.

These large “Stickwork” Sculptures are an outdoor sculptural commission by the Essex Peabody Museum. Residents were able to volunteer to help build them. They definitely add to the spooky vibe of Salem. They seem kind of Blair Witch to me.

The Witch Dungeon was a pleasant surprise. I was a little disappointed with the Salem Witch Museum, I guess I was expecting to be wowed, but after this attraction, I was able to get my spooky vibe back.

It is a short play about the witch trials by two fantastic actors. After the play, you go into a recreation of the dungeon that the “supposed witches” were held in before they were executed. It was dark, spooky, full of jail cell dioramas and manakins hanging from a tree. This was the creepy I was searching for.

This beautiful home is the  Ropes Mansion. It might look familiar to you remember the movie Hocus Pocus it was the home of the character Allison. The movie was filmed in Salem. Places all around the city were used as movie sets.

Next on the tour is the Salem Witch House. Built between 1620-1642 and it is the only home with direct ties to the witch trials. It was the home of Johnathan Corwin, he was a prominent merchant and served as a magistrate. He served on the Court of Oyer and Terminer.

Johnathan’s family was of one of the wealthiest families in Salem, this house shows how they lived. Corwin was called to investigate the claims of witchcraft. He and John Hawthorn performed the initial the examinations of the accused witches.

Ultimately he took part in sending nineteen people to the gallows. All of them maintained their innocence.

Here is Johnathan’s fancy bedroom. This house is pretty incredible for how old it is. The house remained in the Corwin family through the mid-1800’s, was moved, then restored and opened as a museum in 1948.

Last but not least, next up it the infamous Salem Witch Memorial!

The memorial consists of 20 granite benches with the name of the 14 women plus 6 men that were tried, convicted and then executed. Each stone has their name and date of death.

If you look behind the memorial in the image above you will see the tops of headstones, they are right next door in the Burying Point Cemetery. As you see on the sign above, Justice Johnathan Hawthorn, one the witchcraft judges is buried here. He is an ancestor of Nathaniel Hawthorn the writer. So interesting.

I hope you liked my tour of Salem! Of course, I am just briefly mentioning some of the things to do in Salem. We spent most of our vacation in Boston and went to Salem as a day trip. There are many more places to see, like the popular House of Seven Gables, the Old Burial Hill Cemetery meandering through the cute shops and vendors around the Old Town Hall.

Boston is another family-friendly vacation place. We stayed for a week and had a blast, even with a teenager, (which is a tough thing to do).

I have to say the seafood food in Salem is fantastic. I recommend the Sea Level Oyster Bar Restaurant in Pickering Warf. The shrimp were as big as my hand. No lie! Food was excellent.